At the beginning of this year I was feeling particularly rudderless, not knowing where I was going, nor why.  I am someone who likes to have a structure, and work from almost daily to do lists, so when I came across the A Letter A Week challenge I thought that this might be of help to me.
On the one hand it has been a complete failure: I discovered very quickly that when my ideas come I either need to work on them right away, or they need however much time necessary to simmer on my back burner.  On the other hand, the challenge has been successful in giving my mind a new direction to think about, and my quickly made rough draft Peace alphabet led directly to the resolution of a problem I had given myself elsewhere. 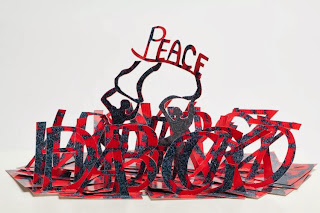 Meantime it was bothering my conscience that I had agreed to produce two alphabets.  It was bad enough that I had not stuck to one letter per week, but to duck out of the second alphabet gave me tinges of guilt.  Then it came to me - but this is definitely not how I should have started!
In the last year of looking after my mother I had made all sorts of little bits and pieces to keep myself occupied, and two of these were double sided constructs which I vaguely thought might make a cloth book.  It was not thought through, and I made them more or less on automatic pilot.  The snaps below are of each side of the same one construct. 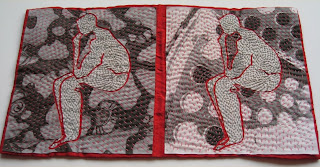 outside cover
When I first started learning about drypoint printmaking I took the same Thinking motif, and made potential double page spreads for this/these potential book/s. 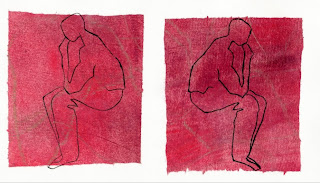 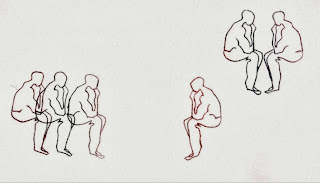 experiment with mixing inks on the same plate- multiple Thinking in smaller size
I made several prints on different kinds of paper, including tissues red and black, and on fine Japanese mulberry paper.  And I thought no more about them until my guilt about the second alphabet and the back burner in my mind fired off a connection.  I think it was going back to Edinburgh recently that did it - reminiscing about everywhere I'd been in my life.  That was it!  I could make the pages into an alphabet memoir, with each letter being the initial letter of somewhere important to me in some way.  After all, I had lived in Zimbabwe for over five months, so Z at least was covered!
As I say, this is certainly not where I would have started if I'd wanted to make such a book from scratch - but this is where I find myself.  I have made a maquette, and sorted out the layout, and now I have to play about with the letters and the words.  It needs a bit more back burner time now - but I'll get there, even if it is not completed in 2013. 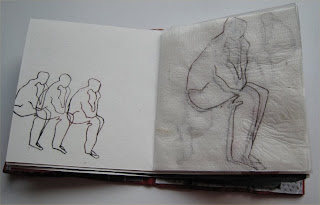 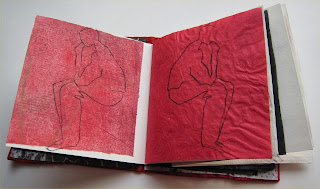 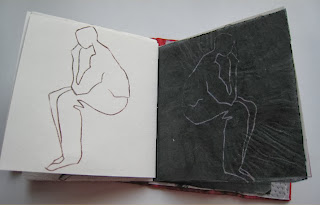 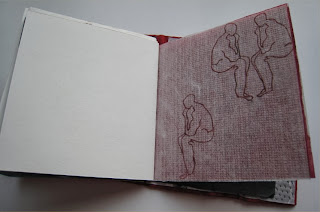 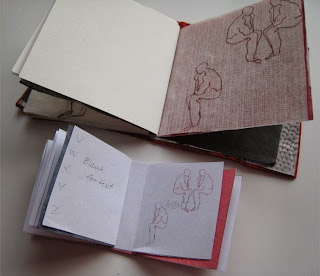 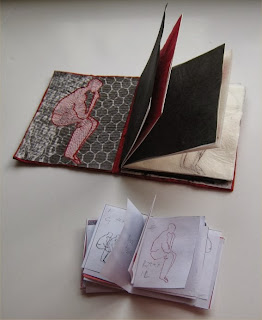 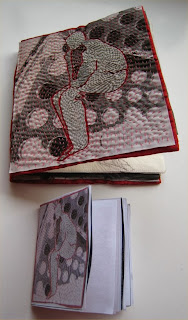 I would like to thank ALAW for the opportunity, which I have misused, and thank you all for the profit I have gained from the experience.
Posted by Olga Norris at 12:37 AM