No, I hadn't completely disappeared ... but I have been woefully slow.

Back in January I posted enthusiastically about my plans for my first ALAW alphabet.  Well, the best laid plans.... but at last I have made progress.  I had a session with the laser cutting studio at college last week, which resulted in two complete alphabets, upper and lower case cut from 2mm black/white card.   I used the hand-written font which I created using yourfonts.com who ran a free offer on National Handwriting Day on 23rd January (who knew?).

I had planned to use these cut-out letters in various ways including relief and collagraph printing.  But I realised this might make the completed alphabet seem rather muddled, and - on the basis that simplicity is often the best solution - I decided to blind emboss instead.

I played around with several different approaches and made four complete alphabet sets, just using the lower case letters so far.   I tried both embossing and de-bossing (i.e. where the letter shape is depressed into the paper rather than raised from it) and using different papers.  They are all interesting, but for the purposes of ALAW 2013 I've settled on the set which are embossed into Somerset Smooth 300gm in a slightly creamy white.

Embossing was quick and easy - no inky fingers!  I rather like the results, including the slightly darkened edges of the letter shapes and their individual surrounds.  This comes from the smoky residue from the laser-cutting process, which will wear off after several pressings.  I also like the irregular and wobbly edges of the letters - the result of enlarging my wobbly hand-drawn original script.  This shows especially well on a few - e.g. the lower case b, whose tall upright is wrinkly, like a slipping-down sock.  Or the wonky interior outline  of the letter o, where my pen has overlapped itself at the top.  In normal writing you don't see these imperfections, but the enlarged scale, and the embossing, exaggerates the wobbles, in what we are so used to seeing as tidy, regular shapes.

ALAW means that you make and post one letter each week.  But as I'm now so terribly late (it's week 22 already...) I'm catching up with a bumper crop now, and will do the rest in orderly weekly posts from now on.

The second rule of ALAW is that one of your two alphabet relates to the theme of Peace.   Blind embossing seems to me to be about silent language, gentle text, whispered words.  Embossing also reminds me of tombstones and memorials, remembering the events of the past and those who have gone.

So these embossed and silent, gentle, tactile letters are my letters for peace. 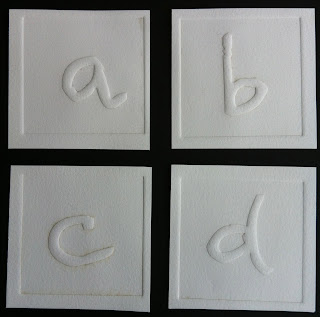 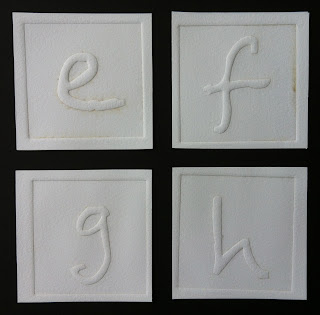 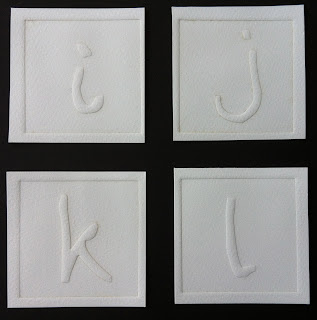 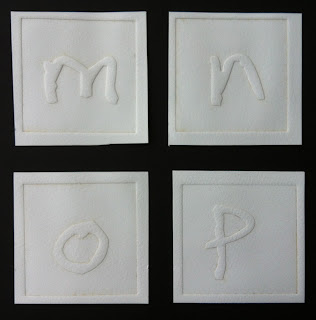 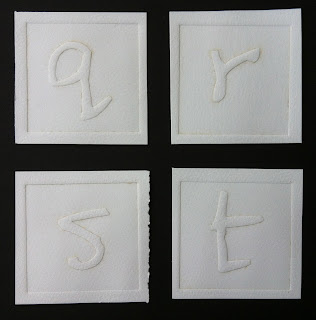