My idea for letters with a theme of Peace looks at it from a different point of view than most I have seen so far on here. I decided to go with the idea of provoking thoughts, prayers, wishes, etc for Peace in certain places in the World.

Here is the background:
Recently, I have been hearing more and more about the way people in certain countries are subjected to mistreatment. People with Christian beliefs are specifically targeted, often being accused of being a threat to the state. The more I hear about the human rights violations taking place, the more it weighs on my heart.

For instance, in northern Nigeria, there is an organised group sending suicide bombers into churches on Sunday mornings. Many have been killed. In another place, girls from Christian families have been abducted and forcibly married in order to 'convert' them. In Iran, friends get together for a Christmas meal in a home. However, sometimes the police come and arrest the whole group and throw them in prison. In one case, most were released, but one lady is still in prison 2 years later. She has not been able to see her 2 young children in all that time.

There is an organisation (Open Doors) which each year publishes a World Watch List of the top 50 countries involved in human right violations of this sort. Their goal is to make people aware of what is happening. Sometimes the fact that the world at large is aware of the plight of certain people has been enough pressure on governments to cause them to release someone from prison or at least allow them medical treatment.

SO, I am challenging myself to make more people aware of these atrocities. I don't often go on about my opinions, but this grieves me deeply.

At our church, we know of several people who work to help those being persecuted. I thought the ALAW Peace project would be an opportunity to create a display as a visible reminder of these issues. Rather like prayer flags in the sense that the purpose of the flags will be to remind people to pray for Peace for all the citizens of these countries. I hope they will make more people aware and will cause people to think about what they can do to make a difference.

What I have chosen to do is to print a square flag version for each country from the 2013 World Watch List onto fabric. I intend to stitch a 'barbed wire' letter onto the first 26 country flags. (I am also printing out the rest of the 50, but am still thinking what to stitch onto them.) For the final presentation, I am going to string them along like bunting to hang in our church. 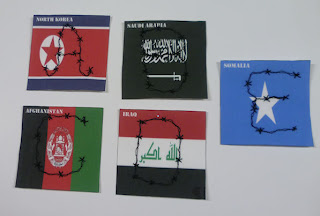 First five flags free machine stitched with my own 'barb wire' font.
Posted by Sandy at 10:37 AM