I knew straightway that the theme of Peace was going to be a challenge, but then that's what I needed.  I thought that the lettering, and the discipline would give me challenge sufficient, but along came the theme!  How does one deal with that visually in an alphabet? 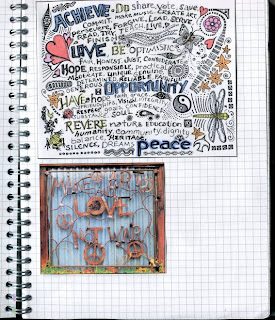 I started by gathering examples of images of peace as found on Google, and pasted them into my notebook for inspiration. 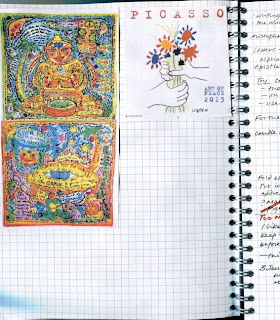 I'm afraid that did not help me much, so I sat down to think about the concept of Peace itself, and ended up asking myself more questions than achieving any satisfactory answers.  Time meantime was passing, and the days were ticking past.
I said to myself: a letter a week, and the first week is almost by ... and then I said it again: a letter a week!  That was (probably) my solution.
I love writing letters.  The best relationship I had with my mother was when I could write to her - she loved those letters.  I really enjoy writing physical hand written letters to my close friends, just as I enjoy writing out notes of research and workings out.  So why not write a letter a week - each letter with its own letter, so to speak.
So, this is what I think* I shall do: *(I'm giving myself until the end of January to come up with a better solution) using the alphabetical letter concerned as a source of content words I shall write a letter exploring thoughts on the topic of Peace.  The letter should also include the capital letterform somehow.  (From now I shall call the letter an epistle, and the letterform a letter.)

Right.  So I knew that I had in my stash of paper a fine paper with a watermark which had up to now been useless (for prints), but would now be ideal.  Somehow I thought that airmail-like paper would be appropriate for the topic of Peace, so I painted the paper with a watercolour made of crushed soft pastel and water.
Once dry I drew an outline capital with a fine waterproof sepia Faber Castell Pitt S pen.  I was intending to write the epistle in black.  I found that drawing the letter was rather wobbly, and repeating it over did not help, so I'm glad that the epistle writing will distract from this - I hope!
Here is D whose words I am still collecting before composing the epistle this week: 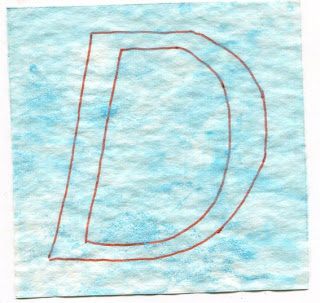 This shows how the wash of blue forms a kind of sky-ness which I wanted rather than an all over flat colour.  I'm afraid I'm also exposing my arthritic wobbliness, but hey ho.  This is a personal challenge, not a competition.
I have also not written thesis level wisdom in the epistles (should I ever aspire to that, in any case!).  I am genuinely curiosity-driven about this whole topic of Peace now that it has been raised, and given the restriction of being spurred by the vocabulary beginning with the letter concerned, I am being conversational - and certainly not aiming at being profound! 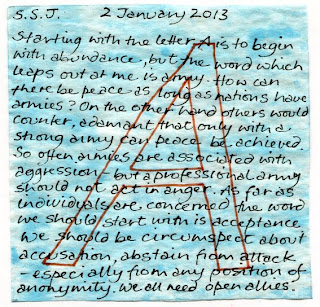 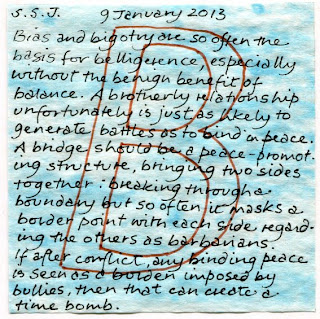 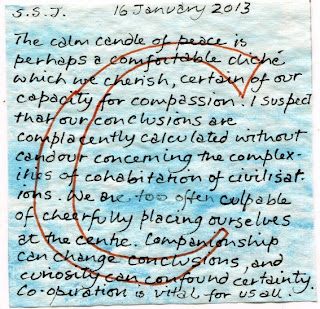 As my fingers are becoming stiffer with the osteoarthritis, I find that the writing helps provide a useful alternate exercise from my other repetitive activities.  So, from a point where I thought that the challenge would be impossible, I think I'm more relaxed now.  I am certainly looking forward to see what everyone else does.
Posted by Olga Norris at 2:33 AM